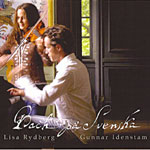 With our classical training as a base and with our feet firmly in the Swedish folk music tradition, we invite Father Bach to dance his own dance side by side with the Swedish "polska". There is much common ground - melody lines, harmony sequences, accentuations, ornamentations and rhythmic inclinations - all giving a common shape or feeling to both kinds of music.

During the Baroque period the distinction between 'classical' music and 'folk' music was not as clear as it is today. There was a living tradition of dances, only sometimes written down. During the 18th century it was an accepted part of a church organist's work in Sweden to play dance music with local folk musicians at weddings and other celebrations. It's a tantalizing thought that these musicians, often of foreign heritage, who could play notated music, maybe - just maybe - could have taught a Swedish folk musician a minuet, a bourrée or a courante from their homeland. Maybe even something from the hands of Johann Sebastian... And in what way, one wonders, would a Swedish fiddler have played Bach?

Each of us have found a personal connection between Bach and folk music.

Lisa discovered that a fast movement in triple time from one of the violin partitas works very well for dancing the Swedish polska - by changing the focus to the dance aspect, the music feels close to a traditional Bingsjö polska. This experience was, in its turn, a reminder that folk music throughout the ages - all the way to the middle of the last century - was played on gut strings, something nearly forgotten today.

Gunnar likes to point out the fact that Bach liked to play and arrange his music for different instrument combinations. This makes it feel absolutely natural for us to perform pieces originally written for harpsichord, or even for choir and orchestra, on fiddle and harmonium, which, although it didn't exist in Bach's time, is considered the most traditional Swedish folk music keyboard.

We have also, out of pure desire, taken such great liberties that we've changed the basic character in certain movements by Bach and turned a few minuets into a pols - a form from western Sweden of a fast polska with the second beat in the bar coming early. This feels natural to us since we're not claiming, foremost, to be true to the time, but have instead chosen to focus on the feeling of the music and find that meeting point.

Bach and the Swedish folk musicians… what if they really did meet?
We wish you much pleasure!

Bourrée from Partita in E BWV 1006

The CD Bach på svenska (Bach in Swedish) and Tyska klockorna can be ordered here
on www.gazell.net